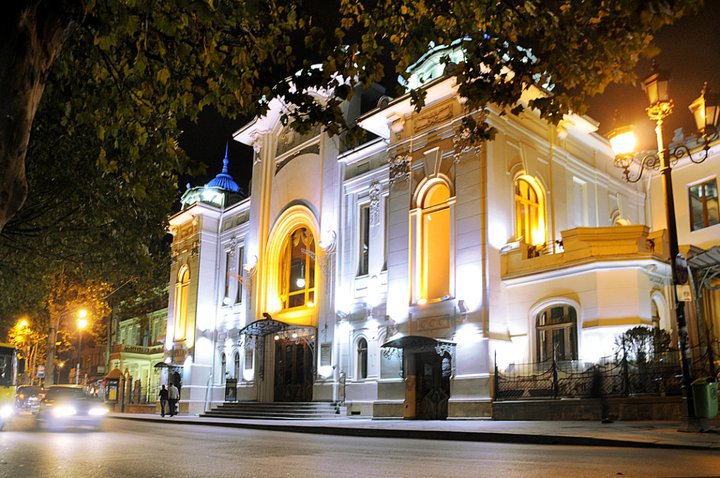 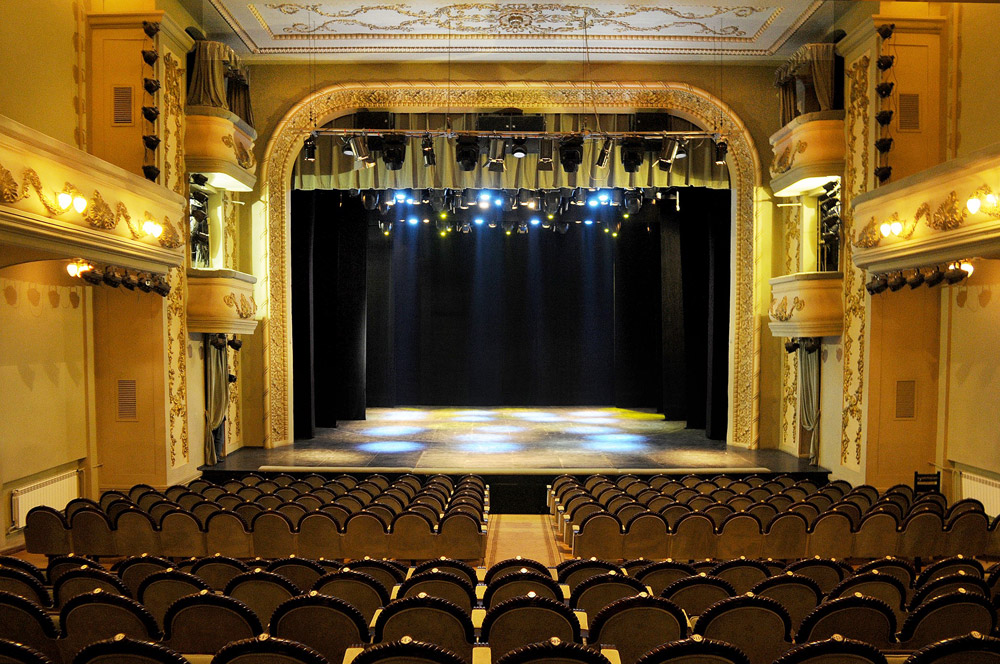 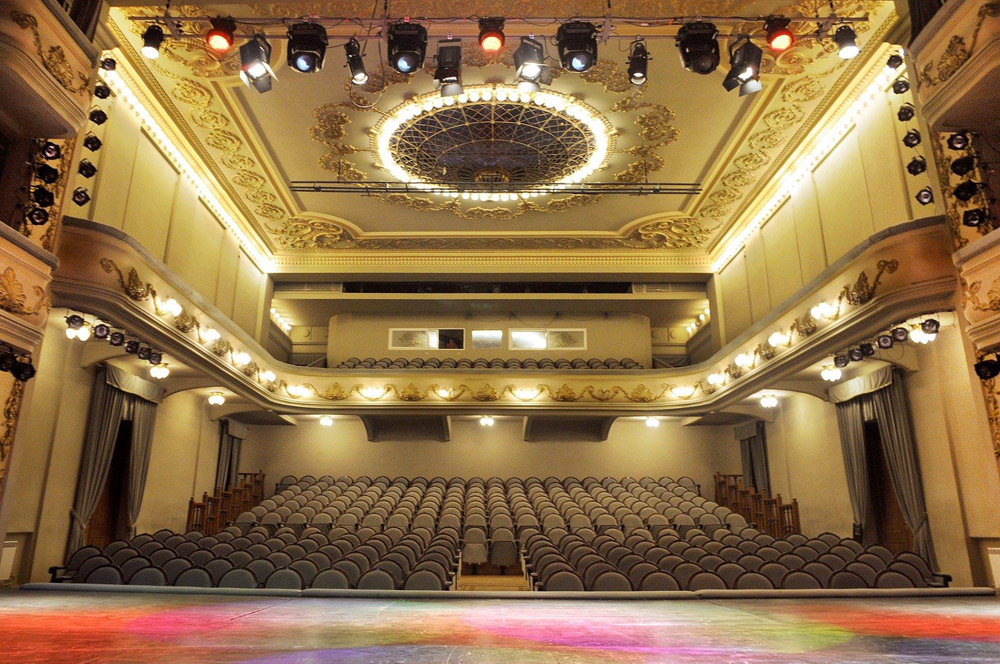 The roots of Georgian theatre date back to the middle of the second millennium BC. The cult of Dionysius spread widely  in ancient Georgia. The proof remains in Vani, Sarkineti and Dzalisi where Dionysius Temples have been discovered, also in Uplistsikhe, the city in rock (3-2 cc. BC) where a theatre building is surrounded with its own stage, orchestra pit and the audience hall. It is clear that antique, theatrical and performing culture was very well known in ancient Georgia.

The professional Georgian theatre was founded in 1850 on the initiative of the leading representatives of the Georgian public. Its founder, Giorgi Eristavi, is a famous playwright and writer. His comedies laid the foundation for the Georgian realistic theatre. Currently there are about 40 professional theatre companies inGeorgia, but very few are subsidized by the state.

In a short period of time this theatre achieved success not only in Georgia, but also in guest performances in Kharkov and Moscow.
It later moved to Tbilisi. During this period he staged  productions such as: “Hopla, We’re  Alive” by Ernst Toller, “ “To the Very Heart” by Shalva Dadiani, “Uriel  Acosta” by Carl Gutzkow, “How” by Karlo Kaladze,  “Kvarkvare Tutaberi” by Polikarpe Kakabadze, “Beatrice Cenci” by Percy Shelley, “Othello” by William Shakespeare etc During the first tours of the theatre in early thirties and after the first demonstration of it’s theatrical wealth, Marjanishvili Theatre was asked to relocate in Tbilisi (1930) and occupied the building of the public house built by the Zubalashvili brothers. In 1933, after the death of Kote Marjanishvili, the theatre was named after its founder.

In that period, Tbilisi’s intellectual life was centered on the theatre.  Writers such as Shalva Dadiani, Polikarpe Kakabadze, Karlo Kaladze, Simon Chikovani and artists such as Petre Otskeli, Davit Kakabadze, Lado Gudiashvili, Elene Akhvlediani and composers such as Kote Megvinetukhutsesi, Andria Balanchivadze have all been drawn to the Marjanishvili.

In the characters created by Veriko Anjaparidze, one can feel the breath of Georgian poetry and music.She is romantically-minded, emotionally elevated as well as full of ardour and scenic charm. These qualities are prominent in the roles of Judit, Desdemona, Medea, grandmother, Fru Alving, Fati Gurieli, Otaraant’s widow etc. but Judit was one of the best roles from her repertoire so as “Uriel Akosta” one of the best plays staged by Kote Marjanishvili in 1929. Later Veriko Anjaparidze twice revived this performance. First in 1962 where the role of Uriel instead of Ushangi Chkheidze played Pier Kobakhidze and then in1972 where in place of Veriko Anjaparidze the role of Judit played Sopiko Chiaureli, the role of Uriel – Kote Makharadze. Time vent and Sopiko Chiaureli also twice revived this legendary performance – in 1991 (Judit – Nino Dumbadze, Uriel – Zurab Sturua) and in 2006 (Judit – Nato Murvanidze, Uriel – Nika Tavadze).

The art of staging plays has attained a high level of success in Georgia. The names of many well-known stage directors are tightly linked with the Marjanishvili Theatre: Vaso Kushitashvili, Archil Chkhartishvili, Vakhtang Tabliashvili, Dodo Aleksidze, Lili Ioseliani, Giga Lortkifanidze, Temur Chkheidze. They are all vivid individualities, whose performances were always characterized by expressive diversity and the high quality of the directing. They have staged plays that have won wide recognition. The artistic directors that defined the aesthetics of the theatre were Kote Marjanishvili, Ushangi Chkheidze, Veriko Anjaparidze, Giga Lortkipanidze, Temur Chkheidze and Otar Megvinetukhutsesi. Since 2006, still now Levan Tsuladze has been the artistic director of the Marjanishvili Theatre. He is known to the Tbilisi public for creating the “Basement Theatre” and for his dramatic experiments and quick tempo.

Vaso Kushitashvili worked in France as a producer for 15 years, at the “Antoine” and “Odeon” theatres. He also founded the “Atelier” theatre. He worked for a time in the United States, in theatres in New Yorkand New Orleans. As a man possessing a high professional culture, deep education and exquisite taste, he had a gift for establishing creative, contacts and work with actors. The following are some of his noteworthy productions at the Marjanishvili theatre: “The Broken Bridge” by I. Chavchavadze, Beaumarchais’ “Figaro’s marriage”; Victor Hugo’s “Ruy Blas”, Shakespeare’s “Richard III”.

Archil Chkhartishvili is a producer possessing a pronounced national individuality. He always finds the source of his inspiration in the very depths of Georgian culture. A. Chkhartishvili takes a deep interest in a variety of genres, all of which are within the scope of his activities as a producer: pageants, celebration concerts, monumental shows. His productions of “The Outcast” by V. Pshavela, “Kharateli’s Home”by M. Mrevlishvili, and “Medea” by Euripide are remarkable for their original form, dynamic scenic rhythm, vivid theatricality and atmosphere.

The performance of Euripides’ “Medea” produced by A. Chkhartishvili at the Marjanishvili theatre in 1962 was another brilliant page in the history of the Georgian theatre. Medea was impersonated by the well-known tragic actress Aspasia Papatanassiu. She said in an interview for the press “I can’t help expressing my delight. The performance was most interesting. It is pleasant to see the great popularity of Euripides inGeorgia. I think this is not a matter of chance.”

Vakhtang Tabliashvili was an erudite director much given to psychological analysis of plays. His talent was revealed at the Marjanishvili theatre where he worked from 1941 to 1962. He had a predilection for historical themes and monumental productions, noted for their scope and the brilliant acting of the cast. They are the plays “Solomon Isakich Mejganuashvili” by Ardaziani, “King Erekle” and “David the Builder” by Levan Gotua, “The Kremlin Chimes” by Nicola Pogodin etc.

Lili Ioseliani’s individuality as a director is fully evident in his manner of working with actors. He has a fine pedagogical flair and a salutary influence on those he is educating.

Giga Lortkipanidze’s style is that of a master of colorful theatrical performances imbued with a national spirit, which is manifested predominantly in Georgian plays. He keenly feels the style and the genre of a play. “Me, Grandmother, Iliko and Ilarion” ,“See the Sun” by Nodar Dumbadze and “Kakhaber’s Sword“ by Polikarpe Kakabadze, all produced by him at the Marjanishvili theatre, are especially significant.

Dodo Antadze was director of the Marjanishvili theatre from 1934-1938 after its founder’s death. He staged a number of noteworthy productions.

Dodo Aleksidze has worked as a producer for 30 years, first at the Rustaveli theatre and later at the Marjanishvili theatre. He has created a monumental manner, characterized by elevated theatricality, fancifulness, variety of scenic devices, expressive staging. In his productions one can always feel a specific means of revealing the peculiarities of a play proceeding from genre. Some of his most interesting productions at the Marjanishvili theatre are: “Don Carlos”, Korneichuk’s “The Heart’s Memory”, M. Javakhishvili’s “Kvachi Kvachantiradze” etc.

Temur Chkheidze examines his characters very thoroughly as well as looks into the deep conflict of the human being and into the psychology of each hero. This is why his productions always reaches the most valuable thing in theatre they are convincing! The visual side of the production always reflects the essence of the original play in the most interesting way. He has been an artistic director of Kote Marjanishvili State Drama Theatre from 1981 until 1988. Since then has worked at this theatre as a producer. Working at this theatre, he has directed performances which always played a distinguished role for the Georgian theatre: “Haki Atsba” by Leo Kiacheli, “Othello” by William Shakespeare, “Jako’s Refugees” by Michail Javakhishvili, “Perfidy and Love” by Friedrich Schiller, “The Crucible”, by Arthur Miller. Dostoevsky’s “Eternal Husband”, Yasmina Reza’s “ART”, “Father” by August Strindberg and “Antigone” by Jean Anouilh – performances that Temur Chkheidze directed over the last period of time and for the time in the country, thus for the Georgian audience, – are productions of a distinguished genre, character, time and the problem, which differ their aesthetics, artistic execution and creative approach to the theme.

In the fifties a new generation of actors came on the Marjanishvili stage, proving worthy of their illustrious elders: Medea Japaridze, Marine Tbileli, Yakob Tripolski, Kote Makharadze, Elene Kipshidze etc. The generation that followed them also created many memorable scenic images and gained popularity. Here are some of them: Tengiz Archvadze, Sopiko Chiaureli, Givi Berikashvili, Guranda Gabunia etc. Among of them was Otar Megvinetukhutsesi. The theatre welcomed him with a company of Georgian legendary artists like Sesilia Takaishvili, Vaso Godziashvili, Akaki Kvantaliani, Sandro Zhorzholiani etc.

Otar Megvinetukhutsesi, the famous Georgian theatre and film actor, was the artistic director of the company for ten years (1996-2005). After founding the Rustavi State Drama Theatre in 1967, he returned to the Marjanishili Theatre in the mids 70s and began a new era for the company with productions such as Oedipus in Sophocle’s tragedy “Oedipus the King” directed by Giga Lortkipanidze and Tamaz Meskhi.

The 2006 autumn theatre season began with Georgia’s dramatic elite gathering in the oldest and most venerable venue in the country – Kote Marjanishvili State Drama Theatre. This occasion was special for a number of reasons: it marked the unveiling of the newly renovated theatre building, and the birthday of the bright star of Otar Megvinetukhutsesi, along with the premiere of a Bertolt Brecht classic “The Three penny Opera” and the opening 76th theatrical season. This performance was directed by Gizo Zhordania and besides famous actors were cast with the new generation of ones that has come to the Marjanishvili theatre.

During this time, the theatre produced about 400 performances and most of them were crucial and expressed the main artistic and social stage of its development. The original Georgian works, as well as the best samples of European Drama always represented core of Marjanishvili Theatre repertoire.

Even though the soviet system denied Georgian artists to represent their theatrical mastery abroad, Marjanishvili Theatre still managed to attend different art and theatre festivals, where critic and public alike have always been enchanted by Georgians passionate and innovate approach to the theatre and to the life.

Marjanishvili Theatre stated its adherence to the classical theatrical traditions as well to the Georgian, antique and modern drama. It has become a place for actors, directors, writers and designers to exchange their new ideas and practices and to develop the theatrical traditions. It has the strongest back up from the legendary Georgian artists while keeping the scent of Kote Marjanishvili’s theatre.

“The aim of art is quite simple: to give happiness to and instill courage in humans”, declares Kote Marjanishvili, the founder of the Kote Marjanishvili State Drama Theatre. After a three-year pause brought on by renovations, it is set to return to its audience. 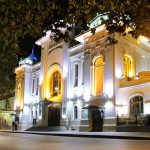 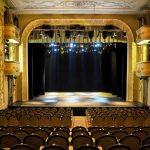 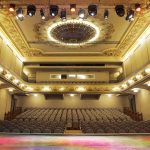